My five-year-old Compaq Presario laptop has had hardware problems and failures since the first year I bought it. Twice I’ve had the motherboard replaced, once on HP’s dime, and once split with them. I think it had a design flaw that allowed it to overheat, which in turn would end up corrupting something in the master boot record. So, ever few months, it would suddenly make a helpless frog chirp sound from somewhere deep in the hardware, freeze up and then could not be rebooted.

END_OF_DOCUMENT_TOKEN_TO_BE_REPLACED

The last two weeks I’ve been spending significant hours on the computer getting ready for the Evergreen State Fair in Monroe. I’m the “Assistant Dog Barn Superintendent”, which means nothing, except that I’ve been unanimously elected to take over in the rare event that my mother, the Dog Barn Superintendent, should get hit by a truck. Unanimously, because nobody else wants to take over her duties. I’m not sure if I, or anyone else, could effectively cover for her anyway!

What I do contribute is some major data processing for all of the several hundred entries that need to be managed in the 4-H dog project over the eleven-day fair.

END_OF_DOCUMENT_TOKEN_TO_BE_REPLACED 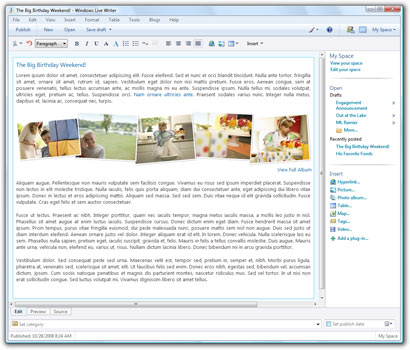 I learned about a nice, freeware blogging tool from doing a “corporate blog” at work- Windows Live Writer. For quite some time, I’ve been annoyed with the slow performance of WordPress’ web interface editor (though I have high speed internet, it’s wireless-all we can get out here, and it’s not that fast).

END_OF_DOCUMENT_TOKEN_TO_BE_REPLACED

I am having some electronic troubles. First, my camera died- it just froze, with the lens open, completely unresponsive, despite a freshly charged new-ish battery. I think I paid over $400 for it years ago when something like 3.2 mega pixels was amazing technology-maybe 8 years ago? It is huge  compared to modern cameras, a real handful; and the keys and lens cover had become sticky, from something. Look at this old clunker, on its tacky plastic desk-hogging dock:

So, I’m not lamenting its demise too much. I replaced it with a very slick, tiny, bronze-colored Kodak EasyShare (the old one was an EasyShare too) for only $130-wow, how prices come down on new technology! So, I’m back in business for taking pictures.

My laptop also failed- I have a Compaq Presario R3240, and it has been such a lemon for me. Twice I have had the motherboard replaced-one on HP’s dime and once on mine. Now, it appears the hard drive and CD drive failed together. So I can’t attempt ard drive repair using the boot CD because the CD drive is dead. I logged onto the HP “chat” help. It’s obviously a help center in India, judging by the “accent” of the helper, and he was obviously dealing with multiple customers at once, because he kept getting my conversation confused with someone else’s. So, he wasn’t much help, after telling him the hard drive BIOS test failed, he was sure the drive is just dead and needs replacing. I wonder if I’ll find that to be true if I can manage to fix the CD drive first, to get the boot CD in?

I spent $300 on parts for it (bought more RAM while I was at it), due to arrive Wednesday. It’s getting to be long in the tooth-maybe 5 years old. But I hate throwing away electronics, it seems so wasteful to replace them every few years. And it’s serving me fine (when it’s working) since I mostly just check email, surf the web, and run Quicken, GIMP, and FrontPage on it. So, I’ll give it one more repair job, which will probably take me several hours of messing around. <sigh> In the meantime, I’ll make do using other computers, like my work laptop, for which I’m grateful during times when I am doing repair on my home laptop!