We utilize two livestock protection dogs (LPDs) to protect our sheep from predators. We live in an area that is rich with wildlife and predatory animals, including coyotes, cougar, bobcats, bears, and bald and golden eagles. All pose serious threats to our sheep and lambs. 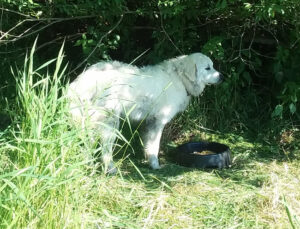 Attie is a new add from 2020, a “Pandemic Puppy” from my friend Bambi’s breeding in Ellensburg. He is half Maremma, and one quarter each Anatolian Shepherd and Great Pyrenees. He is a really nice dog, very sweet and loving towards people, calm around the sheep, and has a good eye for goings-on and coyotes. He was a bit silly with lambs and ewes as a pup, but by the time he was a yearling, he matured and was able to be in with the sheep full time. I am hopeful that the hybrid vigor he gains from being a crossbred may earn him a longer life for a giant breed. And I do think the blend of temperaments gives a little less of a “silly” dog than is the case of Maremmas.

We bought Brinse from a very large ranch in Eastern WA. She came to our farm as a pup in 2016, replacing our older and very valuable Maremma, Bronte, who tragically died from bone cancer at age eight. Brinsa was a lot of work to train and very slow to mature, so for a year or two, she could be seen wearing drag chains, dongles and yokes. These kept her from running the sheep as well as digging out of the fenced areas. Now that she’s mature, she’s doing her job a lot better! But she is a semi-feral dog, and mostly avoids contact with people, even me! 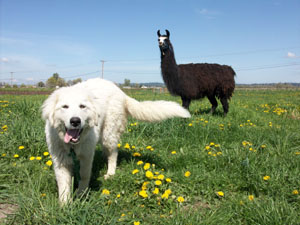 Good LGDs are Both Born and Made

Domestic dogs are generally quite malleable, adjusting to whatever environment in which they are born and raised, and bonding to whichever social groups are available to them. That’s why dogs generally make such fine companions to people. Their natural instinct to bond with other dogs easily transfers to bonding with humans instead; especially when we remove them from their mother and littermates at the artificially young weaning age of twelve weeks or less. (Puppies in a natural state would would otherwise stay with their dam and rearing group until they reach yearling age, or longer.)

LPDs are traditionally whelped in a barn with sheep and lambs, and initially raised with les contact with humans and other dogs, so that their natural primary bond is with their sheep flock. They have strong inborn guarding tendencies, but also enjoy snoozing much of the day! Our dogs are no exception to this rule, and though they enjoy visits from us and our other dogs, they prefer the solitary life of a guardian, and to be with their sheep. They often become most distressed if they are taken away from the flock.

LPDs Are Not Pets…

It is generally recommended that LPD breeds are not kept as pets, as their guarding tendencies, large size, heavy winter coat, and need for space and a job make them a training and management challenge outside of a working environment. Our dogs have been a testament to this reality: they are often chewers, diggers, barkers, rodent killers, escape artists, and very rough at play. All traits that are difficult to manage with an indoor pet.

People often inquire about our guardian dogs, expressing concern for their welfare, living in the pasture year-round. We get a lot of funny questions, like “how do you feed them?” or “aren’t they lonely?” It is a different mind set to get used to the lifestyle of an LPD, compared to the pet breeds which we’re accustomed to having as family companions in the house. But, LPDs are actually very happy in their element, they are made to do this job, descending from hundreds of generations of stock selected for their independence, hardiness, and guarding instincts and traits. Our dogs do have dog houses with straw bedding (but they rarely use them), and of course, water and daily food and visits. We feed all our dogs a homemade, natural diet. This level of care and interaction is all they require, and thrive doing their jobs day and night, rambling in their pastures and keeping an eye out for passers-by and wildlife. Much of the year, the dogs have the opportunity to spend time together, but they often spend time apart. They occasionally enjoy a wrestling match, and greet each other at gates, but typically prefer to spend most of their time alone, napping or patrolling the pastures.

The Ultimate Protection for Sheep and Goats

Small ruminants are very vulnerable to predators, they have no defense mechanisms and are easy for even a thirty pound coyote to kill and eat. Eagles find it’s trivial to pick up ten pound lambs, and cougars can haul a whole sheep or goat over a fence and into a tree in order to dine on it. Loose-running domestic dogs are also a huge threat to small ruminant herds. Predator loss is the #1 reason farmers abandon ranching sheep and goats in the U.S. – so guardian animals are a critical component to success.

You may notice a llama in one of the above photos, pictured with our first Maremma, Bronte. We did also utilize her as a guardian for a few years, but found her to be less effective than the dogs. Llamas are protective of flock mates and attempt to chase away threats, and can be quite scary-looking to coyotes. But in large pastures, we realized it was difficult for one llama to protect a large mob of sheep. Coyotes are clever enough to split the group and run a few sheep down. Llamas may be more suited for guarding in smaller paddocks and with small groups of sheep.

Having big dogs living in our sheep pastures has been an excellent deterrent to coyotes. We often seen our dogs chasing them along the fence line when they’ve tried to approach the pasture. The bark and physical size of LGDs is enough to shoo most people and animals away from the pastures. They are worth their weight in gold for the job they do in protecting our farm assets! And they love their lives, for sure.