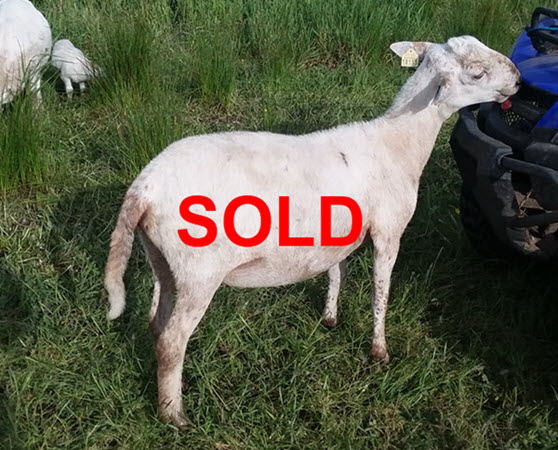 Offered for sale as a commercial ewe/pet $250

A classically built, white ewe, clean shedder. Her dam had mastitis on one side, trying to raise twins as a yearling, so this one ended up mostly being an orphan-rear (though not really a “bottle baby” because I teach them to drink off of a teat bucket right away). You can see in the photo that she’s kind of a friendly pest, always curious about what I’m doing. She is a product of an unplanned late breeding from a cleanup ram, and thus she is somewhat inbred, her sire is also her maternal grandsire. But the rest of her pedigree is outcrossed; so if she were bred in the future, I don’t expect her progeny to be too bottlenecked. In January I caught a small mastitis abscess on her udder and treated that. Subsequently, she did not lamb this year, and has blood-tested open for pregnancy late April. I had a couple of ewes abort during winter and she may have been one of them, or may have resorbed her pregnancy (she had originally tested positive in November for an Oct breeding.) She could be bred in the future and would likely be a reliable producer, though she may have lower milk production if part of her udder was damaged. Otherwise, she will make a friendly pasture pet.