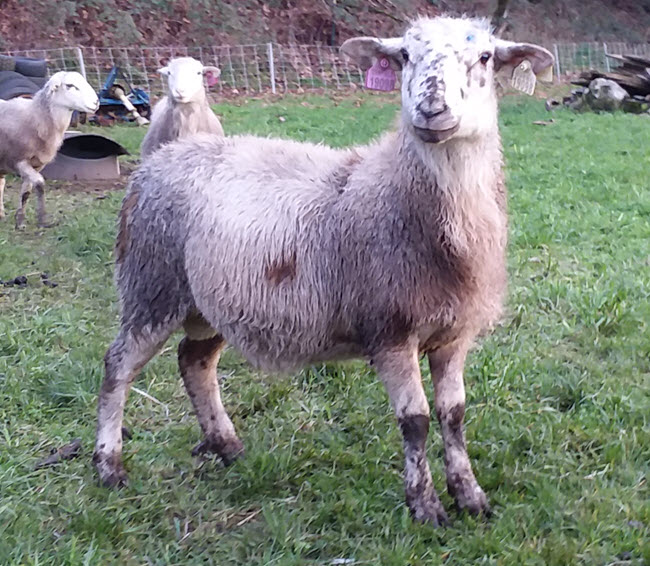 This is KMC 19098 “Lucky”. Why does he look so happy in this picture? Because he was accidentally recorded and tagged as a ewe at birth by the interns. He snuck around with this false identity until nearly the end of October in 2019, at which time, he’d bred about 40% of my ewes! 😀 He is a good ram, but using him this year was not part of my plans, as I’d just spent a lot of money flying in two new rams to use. So it was a bit of a curve ball to deal with, and I’m going to have a two-month-long lambing season. But here we are, Mother Nature constantly humbles us. On the plus side, we can declare his breeding prowess as quite strong, as in a month, he managed to cover a much larger number of ewes than one would normally expected for a ram lamb. His pedigree is a very nice, diverse blend of my own NSIP genetics, now-retired Misty River Farm, Birch Cove (Missouri) and Aspen Mountain (Montana), with a splash of KRK in the background. He has positive growth, very good milk, and good prolificacy, including a high survival metric. I think he’s going to throw some nice, vigorous lambs and good replacement ewes, I just wish he didn’t have quite as much, er, opportunity to dominate this year’s lamb crop!

EBVs below are from 2019 PWWT lamb crop data.