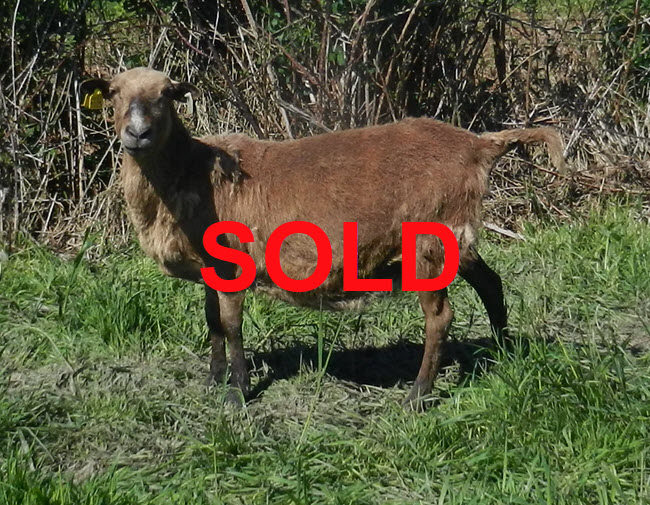 Offered for sale as a registered ewe $275

This is a well-built chocolate ewe with a really sweet and calm temperament and very faithful mothering skills.  She is a good, clean, early shedder. I am selling her because though her EBVs are balanced across the board, they are on the lower end of what I prefer. As you can see from her lambing record, she’s raised twins three times, and singles three times; but in all instances, she was a dedicated mother. She herself is a triplet-born and her mother has raised several sets of triplets. So, triplets aren’t out of the question for her, especially if she is generously fed, but likely most years she’ll have twins or a single.

Her sire is from old-time Washington state stock, out of Bert Martineau’s line, and he’s now retired. Her dam is out of a very strong line of production-focused sheep from Jody Ouradnik (Just Plain Sheep) who’s also retiring, so it’s hard to get her stock. Her maternal grandfather is from North Dakota State University’s research flock of NSIP animals. This is a nice pedigree which avoids a lot of the “frequently used sires” which were over-used in our region, baselining on fresh blood and outcrossing that results in good genetic vigor.

EBVs from this year’s lamb crop post weaning weight data. Photo taken in May with her ewelamb at side. Her ewelamb is KMC7116 and is now weaned.