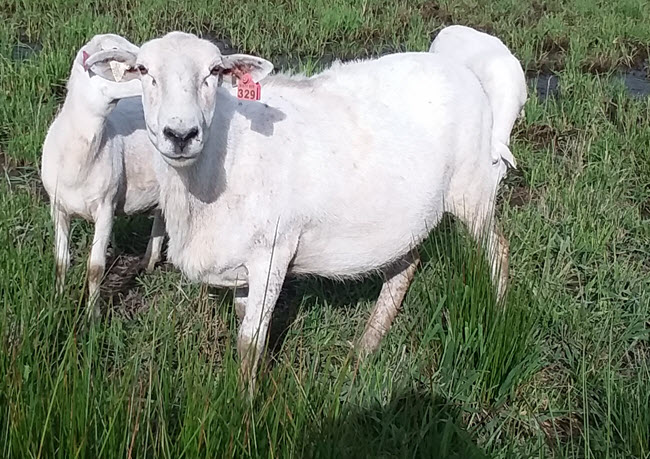 Offered for sale as a commercial ewe/pet $275

This is a large-framed, gentle, white ewe. When Mary Bakko (Misty River Farm, Moses Lake) retired from sheep in 2016, I bought twelve of her highest-EBV ewes. They were in a very different feeding environment in Eastern WA (small acreage, irrigated pasture, super high quality hay) and most of them struggled to transition to my farm at middle age, with more walking required, grazing more marginal forage, and a different parasite load. I have found in Mary’s feeding system, she consistently got these very large frames (circa 180 lbs) whereas these same genetics don’t get as big on pasture at my farm, hovering more around a standard 150 lbs. This is one of the last ewes here from that purchase, I’ve mostly kept daughters out of those ewes to capture the genetics, but moved the original ewes on or culled them for being unthrifty.

Last year this girl had the start of a vaginal prolapse so I brought her into the barn and harnessed her, but she subsequently aborted three mid-term triplets (which was likely the cause of the prolapse). Curiously, my guardian dog spent a lot of time in her jug, and she bonded to the dog during that oxytocin kick, so now whenever she can, she hangs out near the dog because she loves her. 🙂 She is also pretty calm and friendly from being raised on a small acreage, so even though she’s huge, she’s easy to handle. This year, she was marked by a ram on the first day of breeding season in November, but then never lambed in April. I blood-tested her late April and she is now open. I witnessed an aborted lamb early in the season, plus one ewe lambed in January in the dark during the night, and I missed it, and the dog took it (lamb was confirmed born live via inflated lungs, but never nursed or stood). So I dunno what happened with this girl, she may have had that early single lamb, and since she loves that dog, she may not have defended her lamb against the dog’s goofy play. Or perhaps she aborted or resorbed her pregnancy. Her lambing record starting as a two-year-old: 2/2, 3/2 (one stillborn), 2/2, 3/0, 0/0 (?).

There would be nothing wrong with trying to breed her again, she has good EBVs (except for taking the hit on NLW). She might do well back at a small farm with more intensive husbandry, but odds are lower that she can carry to term or be productive. Thus I’m selling her at a cull/pet price. I usually get $2/lb live weight for mutton ewes, so I’ve discounted her quite a bit from that because I think she’s a nice girl who would enjoy being a pet on a small acreage again. Mary loved her ewes, and I believe this one’s name was “Nancy” back then. 🙂