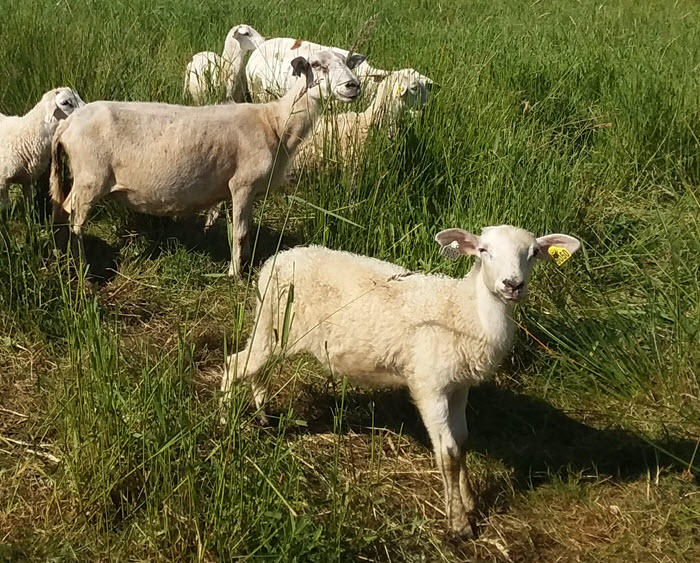 Offered for sale as a registered ewe $300, exposed to a ram

A really big-bodied, solid, reliable ewe with good growth EBVs, and low on prolificacy scores. Her lambing record starting as a 2-year-old: 1/1, 1/0, 2/2. So, she may waffle between twins and singles, but is likely to twin for several years since she’s in her most productive years. Last year she had a huge single ram lamb that was shoulder-locked in delivery overnight. I didn’t find it in time to pull it and save it, so that wasn’t really her fault, and that hurt her NLW score. But that year, I grafted two unrelated lambs onto her instead; she was a very receptive, and became a very maternal and protective mother of them. So, I think she’s a good ewe for a starter flock, stable and experienced.

This year in the fall (2019) she developed a case of mastitis which manifested outwardly in an abscess. I have treated her with antibiotics and it healed fine, but she likely has a one-sided udder now. She may be able to raise twins, but will likely benefit from some supplemental bottle feeding, or just raising a single and having any multiples orphan-reared. Thus I am discounting her to cull price: you can get a couple of lambs out of her and see how things go. If she doesn’t sell in 2020, I’ll cull her myself when she is done lambing.

Photo taken June 2019 with one of her lambs in the foreground.  EBVs from 2019 lamb crop PWWT data run. She has been exposed to a ram (KMC 7045) and is due late March/early April.